The Copaquire project is one of the most unique copper-moly projects in all of South America containing both high grade molybdenum and copper. A molybdenum rich core (Cerro Moly) surrounded by a large porphyry copper system (Sulfato) with grades of up to 2% copper.

In May 2012 PBX signed a definitive Joint Venture Option Agreement with OZ Exploration Chile Limitada, a wholly owned subsidiary of  OZ Minerals Limited of Australia, on PBX’s Copaquire copper molybdenum property. The terms of the Agreement allow OZ Minerals to earn a 90% interest in Copaquire by making cash payments of $90 million and drilling up to 30,000 m.

The 100% owned Copaquire Project is located in the Chilean copper porphyry belt. This arc-parallel belt includes 30 porphyry Cu-Mo deposits and prospects with the largest amount of copper concentration in the world, totalling about 220 million tonnes of copper. The Quebrada Blanca and Collahuasi producers are within 15 kilometres of the property

Geologically the Copaquire Property includes several mineralized targets (Cerro Moly, Sulfato South and North, the Marta Zone and the Skarn Zone) all which are related and correspond to a large porphyry copper system (of Tertiary age) intruded into Jurassic and Cretaceous rocks within dominant structural controls (such as faults, fractures, dikes and breccias) that are located immediately west of the regional West Fissure Fault (Domeyko System).

The main rock types that outcrop in the Sulfato area correspond to a group of Jurassic marine meta-sedimentary rocks and Cretaceous volcanics. These rocks are intruded by a series of Tertiary acid intrusive rocks of which the main ones are the Marta Granodiorite Porphyry, and the Cerro Moly Quartz Monzonite Porphyry.

The Copaquire porphyry is an intrusive unit outcropping both at Quebrada Sulfato and the southwestern sector of the area. It intrudes older magmatic bodies and it has been interpreted as the last and most differentiated event of the Eocene intrusive period. It has a petrographic composition of a dacitic-rhyolitic porphyry with characteristic “quartz eye” phenocrysts in a fine grained groundmass.

Cerro Moly is a distinct and separate porphyry Stock. It is mainly composed of quartz-monzonite that hosts molybdenum rich mineralization with subordinate copper. Sulphide mineralization is mainly composed of quartz-molybdenite veins and stockwork type veinlets. Minor chalcopyrite has been observed in quartz-pyrite-chalcopyrite veinlets. This quartz-monzonite intrusive is mostly with potassic alteration which can be seen as veinlets of k-spar and secondary biotite. This intrusive also has disseminated pyrite and magnetite. remains open at depth and along the SW-NE long axis of the mineralized trend.

A 2009 Resource Estimate was completed on the Cerro Moly zone.

*Mr. Aldo Vasquez, MAusIMM is the independent QP responsible for the 2009 Resource Estimate.

Based on over 10,000 metres of diamond drill holes completed in the Sulfato areas, it is concluded that the main hypogene mineralization controls in Sulfato South, are similar to the mineralogical controls found in the giant copper porphyry deposits in northern Chile.

Particular similarities have been observed in the geological framework of Sulfato South and that of the Spence Mine (BHP), as the sequence of intrusions in both cases penetrate similar folded sedimentary units of Jurassic and Cretaceous age. The main mineralization event (chalcopyrite and pyrite) in Spence has many similarities with the mineralization style observed in Sulfato.

In the case of Sulfato, a nucleus of high grade copper hypogene mineralization (Bornite-Chalcopyrite) has not yet been recognized, probably due to the shallow depth of drill holes. As in the case of Spence, this high grade nucleus has been recognized. This makes it necessary to drill deeper holes in the Sulfato area or nearby areas.

2010-11 drill programs defined a resource for the Sulfato Zone.

*Metal equivalent data are based on US$ 2.50/lb. copper and US$13.50/lb. molybdenum.  In calculating copper equivalencies 100% metal recoveries have been assumed. The contained metal figures shown are in situ.

Inferred Mineral Resources that are considered too speculative, geologically, to have the economic considerations applied to them that would enable them to be categorized as Mineral Reserves.

The identified inferred resources are located within an area representing only 30% of the surface alteration area that defines the Sulfato South zone and the ultimate depth of mineralization has not yet been drill tested. PBX considers that additional diamond drilling to the east and south of the current resource block has the potential of incrementing the resources of the Sulfato South Zone.

1Metal equivalent data  are  based on US$ 2.50/lb copper and US$10.00/lb Moly. In calculating copper equivalencies  100% metal recoveries have been assumed.

The sequence of geological events and their relationship to the copper mineralization at the Sulfato North zone are believed to be similar and related to that observed in the Sulfato South Zone. This is based on similar surface geology, alteration, data from previous RC drilling and this year’s diamond drill hole CQ-110 drilled in Sulfato North, which contained copper mineralized intrusive and hydrothermal breccias as those observed in Sulfato South.

The Marta zone is located approximately 2 kms west of camp. It is a granodiorite intrusive complex that has an elongated shape and measures approximately 4 km long (N-S trend) with an approximate width of 2 km (E-W).

Surrounding the area of molybdenum mineralization, several zones with copper oxides and chalcopyrite on fracture surfaces have been identified. The Marta Zone is believed to be an intrusive complex in which the host rock has been observed to be mainly an equigranular granodiorite with pottassic alteration.

Mineralization in the Marta area is intermittently exposed over several hundred meters and is characterized by potassic altered intrusive with quartz stockwork veins and thin coatings of copper oxides along fracture surfaces. Within this zone an intrusive breccia pipe is exposed which exhibits angular intrusive with impregnations and flooding of chrysocolla (hydrated copper silicate). A chip panel sample (3.0m x 1.0m) taken from the copper intrusive breccia on the Marta assayed at 2.04 % copper. In addition a central core area with quartz-molybdenum veins and stockwork mineralization within a potassic altered intrusive returned grades of up to 0.10% moly across a 3m x 1m panel sample.

During 2010 a significant skarn zone was identified in the south central area of the Copaquire Property. The skarn trends N-S for approximately 800 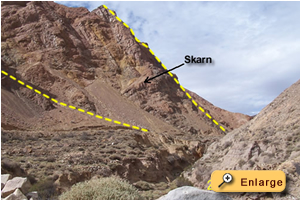 meters and remains open in both directions. Along the Huatocondo road it has an exposed width of approximately 300 meters. It is bound to the east by the Moly Hill intrusive and to the west by the Marta intrusive complex.

The skarn  is observed to have undergone significant retrograde alteration, as evidenced by the replacement of lower temperature minerals such as epidote, from higher temperature ones as garnets. Still visible in outcrop are areas that show the skarnified banded sediments to have a North-South strike and subvertical to vertical dips.

The skarn is mainly composed of epidote, chlorite, actinolite, magnetite and remnant garnet. Sulphide mineralization has been observed in quartz-pyrite-chalcopirite veinlets, also as irregular blebs or concentrations. In outcrop along some fracture surfaces stains of chalcanthite and thin layers of chrysocolla have been observed.

At Copaquire, Skarn mineralization (proximal type skarn) occurs at/or near the periphery between two intrusive contacts with non-calcareous meta-sediments. It is known that higher copper concentrations may only result in districts with multiple intrusive episodes and fluid pulses as those observed at Copaquire. Proximal skarns lacking hydrous, retrograde overprints are unlikely to host significant copper deposits.

Non-calcareous meta-sedimentary host rocks at shallow depths (less than 500 m), as seen at Copaquire, generally tend to deform by fracturing and faulting rather than folding. Faulting and fracturing are more likely to control hydrothermal activity accompanied with the formation of skarn and sulphide minerals.